Nine months ago, Teagan Matthews' boyfriend disappeared and took her sense of stability with him. But when the opportunity to live with her aging grandmother in Salem arises, she decides it's time to get on with her life. A new home, new job, and new friends are adding up to a beautiful summer...

...until a young girl's body shows up one night in town, wearing a pentagram necklace exactly like Teagan's.

Now a guy, looking remarkably like her missing boyfriend, has arrived in Salem along with a mysterious stranger, who may have some answers that Teagan has desperately been searching for. Teagan must now decide who to trust. It's a matter of life... and her death.

Re-Released as an NA Paranormal Romance!
*This book was previously published as Summer in Salem but has gone through major plot changes and edits. Not recommended for readers under the age of 17.*

Discovery is technically a re-release of a story once known as Summer In Salem. I truly enjoyed Summer in Salem. But that doesn't stop me from being excited about Discovery! I can tell just by the teaser quotes that the story has had a pretty big overhaul! I cannot wait to see what new elements Brina added, and what these changes mean for Teagan!

In celebration of Discovery's release day Brina is giving away this gorgeous Pentagram bracelet!
Fill out the rafflecopter form below to enter! 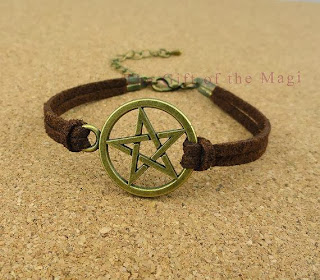